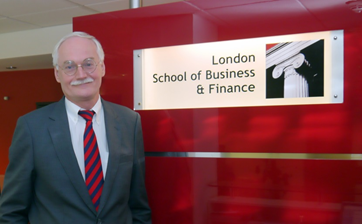 LSBF is proud to announce that its Chief Executive and Rector, Prof Maurits van Rooijen, has received the 2013 Constance Meldrum Award for Vision and Leadership from the European Association for International Education (EAIE).

With a career spanning 25 years as an international educator and pioneer in the globalisation of education, Prof van Rooijen is a social and economic historian and the author of several books. According to the EAIE, "he is being recognised this year as a continuous innovator and driving force in the international higher education. Many ambitious and innovative internationalisation projects have been initiated under his leadership and developed at a rapid pace, in some cases resulting in the institution receiving awards for innovation and internationalisation."

As a leading thinker and academic, Prof van Rooijen's has played a pivotal role in the expansion of innovation and academic development at LSBF. With a track record in delivering innovation and internationalisation at top universities worldwide, Prof Van Rooijen believes that by working in partnership with universities, employers and other key players in the knowledge economy, LSBF plays a pivotal role in the globalisation of the sector and expanding access to education worldwide.

"My consistent message over the years has been that higher education cannot be immune of the globalisation process, nor should it want to be. As a consequence, higher education faces a broad range of exciting opportunities, but also imperatives, if wants to remain relevant for the decades to come. The news about receiving this European recognition for the work I, together with many colleagues, have been doing in this respect, was - to use the appropriate English understatement - a very nice surprise", said Prof van Rooijen.

The 2013 EAIE Awards will be presented at the 25th Annual EAIE Conference, one of the most important forums for international education professionals. The event will be taking place in Istanbul, Turkey, in September, and is expected to attract over 3,000 members.