The CFO role is often thought of as being largely preoccupied with numbers and data, but in the last few years, and indeed in the wake of the COVID-19 pandemic, the role has evolved significantly.

In June 2020, ACCA and IMA set out to understand what the role of a future CFO would look like by conducting a survey, as well as a roundtable, of 1,152 ACCA and IMA members. The survey and roundtable sort to address questions over how the traditional CFO role has evolved and what skills aspiring CFOs would need to have in the future.

Traditionally, CFOs have been tasked with evaluating the financial performance of a company. Their main responsibilities involve number crunching and producing budgets, forecasting and reports. However, the ACCA/IMA report identified that many CFOs and CEOs felt the CFO role was evolving. It was hypothesised that ‘the CFO will come to predominantly focus on stakeholder and investor management rather than safeguarding and reporting’. Results from those surveyed showed that many felt this was already happening or that it was likely to happen within the short to medium term.

It was also hypothesised that ‘the CFO will have a leading responsibility for business strategy formulation, validation, and execution’. Similarly, a significant proportion of those surveyed felt this was already happening or that it was likely to happen within the short to medium term.

The impact of the pandemic

Hiba Daaboul, a Zone Business Controller at a food company stated: ‘what COVID taught us is that we can be a lot faster than we were. There is no place for perfectionism. We have to be more agile; to be more out there and drive change.’ Daaboul’s comments highlighted a movement away from a traditional number-crunching role and a movement towards other aspects of business development.

Additionally, Suryanarayanan Balasubramanian, the CFO of iWise group, also commented on the impact of the COVID pandemic on the CFO role: ‘companies are looking for your ideas and guidance on navigating. The focus is on how I sustain cash flows, in analysing where it might have gone wrong. The way that the CFO is currently performing is that the strategy is important, but they are rolling up their sleeves and facing every incoming dollar to somehow ensure that the business survives into 2021 and 2022.’ Balasubramanian highlighted that strategy has become a strong focal point for CFOs, not just the figures in front of them.

Additionally, changing technology, the speed of business change as well as governance and risk areas were all identified as having an impact on the CFO role.

The CFO of the future skill set

It is not just views on what the CFO role entails that have changed. Many feel that in order to thrive, CFOs need to develop new skills. The Finance Director at Sofitel, James Lee, stated during the ACCA and IMA roundtable: ‘If you compare the ‘bean counter’ of 30 years ago with the bean counter of today then the bean has been transformed. As the CFO of today, you need to know a lot more about beans, where they come from, what you produce, is it good for the environment? Even the simple methods are now multidimensional. That makes our roles remarkably interesting. It is a question of trust.’

Not only do CFOs need to be superb with numbers, but if they’re going to succeed in the future, they’ll need to have developed a range of soft skills as well. Roundtable participants felt the core skills of the role included consulting, risk and control, leadership, strategy and business acumen as well as investor management. 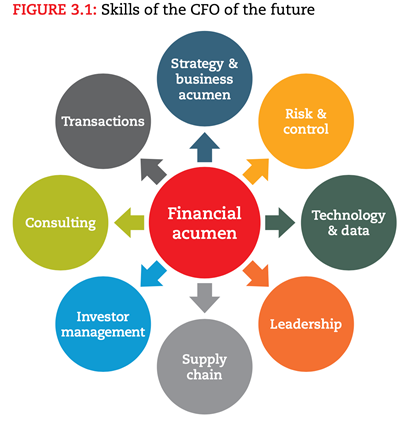 The report concluded with some thoughts on the development path for future CFOs. Of those surveyed, 45% did not believe enough attention was being paid to developing the skills of the next generation of CFOs compared to 34% who did.

The report found that people felt that peer-to-peer networking and informal learning was important, in addition to holding the right education qualifications. Many felt an emphasis should be placed on mentoring and coaching.

Overall, the report found that the pandemic has ‘placed the CFO role at the forefront of many entities’ and therefore has made businesses consider whether this role should continue to focus solely on financial issues. It was also concluded that there was a necessity to rethink the CFO career path as well as the skills needed to be successful in the role.

To find out more about the evolving role of the CFO, you can read the full ACCA and IMA report, ‘The CFO of the future’ here.