#CareersInCharity: An Interview with Brigadier Robin Bacon (Retd.), Chief of Staff at ABF The Soldiers’ Charity

Brigadier Robin Bacon (Retd.) served in the British Army for 32 years, starting as a logistician in Germany during the Cold War. His career took him around the world, serving with the Royal Corps of Transport (now part of the Royal Logistic Corps) in Hong Kong in the 70s and 90s, with the UN in Africa and with NATO in the Balkans. Back in the UK, he did a part-time MBA, funded by the Army to provide him with the skills needed to lead and organise personnel at a higher level.

Upon retiring from the Army in 2010, Robin joined what was then called the Army Benevolent Fund (ABF) as Chief of Staff, a similar role to that of a Chief Operating Officer in the private sector. The charity, now called ABF The Soldiers' Charity, is the British Army’s national charity, supporting soldiers, veterans and their families when in need.

As part of our #CareersInCharity series for International Day of Charity 2018, we spoke to Robin about his work at ABF The Soldiers' Charity, what a career in the charity sector means to him, and how his MBA got him to where he is today.

Can you give us some background on ABF The Soldiers’ Charity?

The ABF was originally formed at the end of the Second World War to assist soldiers and their families after they were discharged from active duty. This was based on lessons learnt at the end of the First World War, when thousands of wounded and distressed soldiers were returning from the trenches in France, to a country that didn’t have a system in place to care and rehabilitate them.

Today, The Soldiers' Charity helps active soldiers, veterans and their families with housing, mobility (e.g. stair-lifts and home modifications), electric wheelchairs, education, employment and training. We’re always keen to emphasise that we provide assistance ‘from cradle to grave’ - from helping a sick 2 year old, to enabling a 103 year old to still live at home.

So what does a Chief of Staff do?

A Chief of Staff is essentially the Deputy Chief Executive Officer, and is responsible for the overall day to day running of a company, a role that’s similar to that of a Chief Operating Officer.

At ABF The Soldiers’ Charity, I act as the company’s secretary meaning I am responsible to our board of trustees for the effective running of the charity.

My responsibilities include safeguarding, HR, information system management, facilities management, and all the administrative support. I also oversee data protection in the form of GDPR compliance.

I work closely with the fundraising, finance and grants director and their teams on business development, in order to exploit leads in the commercial sector. My favourite part of the work I do is leading major national events, such as the Cateran Yomp in Scotland and the Frontline Walk in France and Belgium. 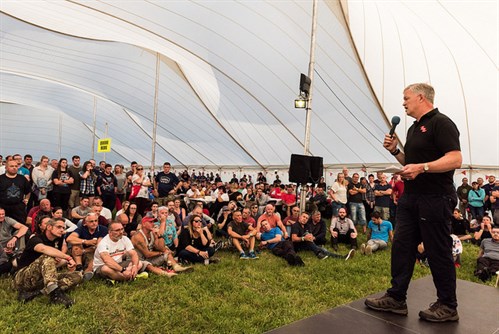 Robin addressing participants of the 2018 Cateran Yomp, a 24 hour-long 22 to 55 mile trek through the Cairngorm Mountains in Scotland. Credit: ABF The Soldiers' Charity.

A typical day includes a number of bilateral meetings with heads of department and staff, which are known as ‘morning prayers’, a term borrowed from the military. I also work on making arrangements for future events, for example the upcoming Royal Visit in 2019, and negotiating over the terms of our office lease. Then there are meetings with third party contractors and ensuring that they adhere to our rigorous data protection standards as data processors. On top of this, I approve fundraising themes and messaging.

On occasion, I act as media spokesman for the charity, and have been interviewed live several times on BBC Radio 4 and numerous television channels.

I also work very closely with our charity ambassadors, who are former beneficiaries, as they often act as guest speakers at the fundraising events.

I’m acutely conscious of my responsibilities for good governance. I take great pride in the fact that for the third year running, we appear at the very top of the charity sector’s annual survey of the 150 largest charities in the UK for delivering on promises and spending money wisely. I see this as a tremendous selling point for corporate partnerships and sponsors.

No one day is the same – I relish dealing with the unexpected, for example chasing and securing a sponsorship deal when the opportunity presents itself.

What inspired you to work in the charity sector?

I chose the charity sector over the private sector, because I get immense satisfaction from doing what we do. Knowing that we make a positive impact on the lives of tens of thousands of people is truly rewarding.

This is combined with a lifetime of working with soldiers, recognising that they have problems that are not easily understood by the general public, and can need specialist help. The vast majority of veterans go on to have successful second careers, but there is a minority who really do need help. I feel well equipped to get them the support they need and deserve.

Additionally, I’m personally not motivated by financial reward or shareholder profit, although of course I have great respect for my colleagues in the financial sector, with whom we work closely.

My working life provides tremendous variety, which I doubt I would get in other sectors.

For any organisation, it's important to have a shared mission - even more so in a charity - how do you rally your teams around The Soldiers’ Charity’s mission?

Our mission and values are displayed prominently within the charity, and repeated in every annual review, impact review and publication. In staff meetings we often talk about our values, which are illustrated with examples of people we’ve helped throughout the year. We also ensure that everyone is informed of key issues and events.

In many ways, our values reflect those of the British Army, in terms of loyalty, moral courage and respect for beneficiaries.

Do you feel your MBA helped you get to where you are today? If so, how?

When I was HR Strategy Director at the Ministry of Defence, my MBA was a great asset, and it certainly helped me get my current job as Chief of Staff at ABF The Soldiers’ Charity. It gave me a tremendous grounding in all the important areas of business and management, including finance, marketing, HR and so on.

I use the models I acquired studying my MBA often. For example, I use Porter’s marketing model, stakeholder mapping, the GE matrix, and a great deal of the project management, change management and organisational behaviour principles.

My MBA also gives me the ability to take a strategic view, as well as manage the operational business. This is because without a strategic view, we would be far less effective at our outputs and therefore spend our money less wisely. Also, your operations quickly become disjointed, and ineffective - it’s easy to burn money if you don’t have a strategic plan.

I learnt a great deal about chairing meetings on obscure but important subjects. For instance, I felt extremely well equipped to be interviewed for my current position by the Trustee, who had been the CEO of a major European bank, because I could talk his language.

My MBA gave me a very wide appreciation of business terminology, and how to use them appropriately in different situations. Given that one of our largest corporate partnerships is with a major UK bank, I am confident in communicating with their senior hierarchy.

It also gave me a crystal clear understanding of financial management, for example, how to measure returns of investment and understand the Net Present Values associated with long term capital projects.

In recent years, we’ve made a number of acquisitions of other charities, and I know that the wide ranging skills acquired through my MBA have helped considerably.

7 Benefits of Studying an Executive Course at LSBF

The fiercely competitive business domain of today requires you to constantly update yourself to stay relevant in your career. Pursuing…

How to Adapt Your Professional Skills For the ‘New Normal’

The ability to adapt to adverse circumstances and new challenges is considered an ideal attribute in the corporate world, especially…