Singapore, 16 November 2017 – London School of Business and Finance in Singapore is proud to announce it has received the Lotus Award and the Best 3R Award at the SEC-StarHub School Green Awards (SGA) 2017. 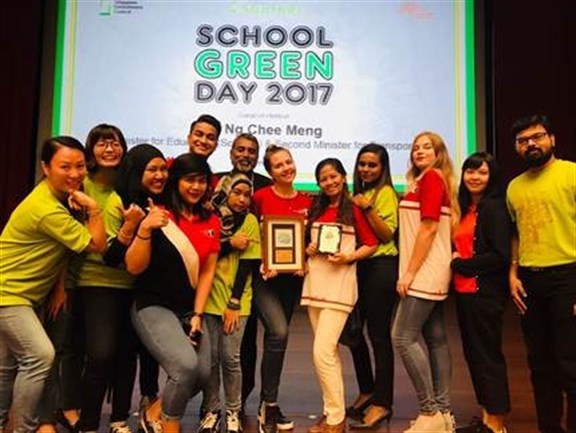 The SGA is organised by the Singapore Environment Council (SEC) and supported by one of Singapore’s major telecommunications companies, StarHub. The SGA recognises efforts by schools in environmental preservation, including energy management, water conservation, and initiatives promoting environmental protection.

The Lotus Award is given to schools with a score of 95% and above, and which showcase at least one innovative environmental project to promote Singapore's sustainability. The 3R Award is based on a school’s efforts in carrying out the three R’s: reduce, reuse, and recycle.

“The school has attained the Lotus Award for the second consecutive year, and we have been receiving a higher award every year since 2014,” said Vinod Kandavelu, Senior Quality Assurance Executive and Chairman of LSBF in Singapore’s Green Committee. “All this was made possible by our LSBF Green Committee and the student Go Green Club. These awards recognise continual efforts by our staff and students in keeping the environment cleaner and greener.

“Next year, we hope to plan and implement more green initiatives and work towards sustainability, which will be in consonance with the school’s future vision and our philosophy of continuous improvement,” said Mr Kandavelu.

About LSBF in Singapore

Since its inception in 2011, LSBF in Singapore has provided education to more than 10,000 students from over 20 countries, equipping them with the skills they need for a successful career. With the support of LSBF in the UK and its royal patron, His Royal Highness Prince Michael of Kent GCVO, the school has partnered with several globally ranked universities and colleges across Asia. It has two campuses in the heart of Singapore’s business district, ensuring that students can benefit from the city’s dynamic environment.

The school has won several awards, including:

LSBF in Singapore is committed to delivering the best educational experience possible for students.