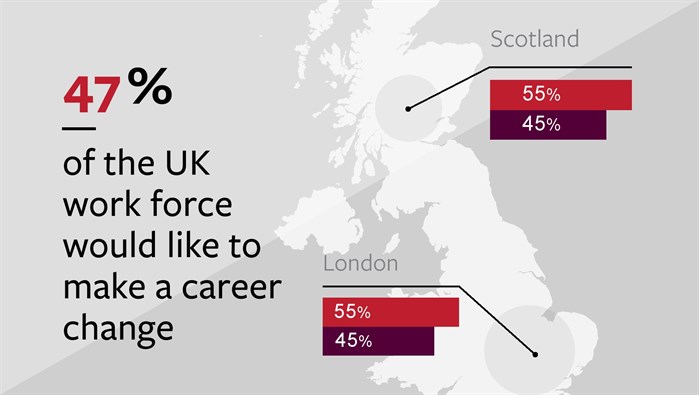 London, 18 September 2015 – Nearly half of all workers in the UK (47%) would like to change career, according to new figures released today by the London School of Business and Finance (LSBF).

The LSBF Careers Report shows that more than one in five workers (21%) are looking to career hop in the next twelve months, with increased salary prospects, better work-life balance and improved job satisfaction cited as the main reasons for wanting to make a switch.

Around a quarter (23%) of participants revealed they actually go as far to say they regret their current choice of career – this figure rose for younger workers, with 30% of 25-34 year-olds regretting their current career choice.

Despite such disillusionment, many people are still unwilling to change careers owing to a number of factors they feel hold them back. Almost a third (29%) said the lack of financial security around changing careers was a major barrier, while uncertainty about what to switch to (20%) and a fear of failure (15%) were also identified as obstacles to changing career.

Dr Steve Priddy, Director of Research and Academic Dean at LSBF, said: “With a changing economy and new sectors creating jobs and business models that would not have even existed a decade ago, many professionals may consider the option of jumping ship and facing the challenges of a new career path. However, how do people feel about making a career change? Are they professionally prepared? Do they know how to go about it? What are people’s main fears about a major career move? Money, uncertainty, lack of support, lack of training? These are some of the questions that this report tries to answer.”

“From my perspective, what is important before any major career move is to ensure you are appropriately qualified to take on the new role and to understand the sector well enough in order to make the most of potential opportunities and to navigate the system as if an insider”, added LSBF’s Dr Priddy.

The statistics also showed differences in attitudes among age groups with two thirds (66%) of workers aged between 18 and 34, those typically considered as being ‘Millennials’, wanting to change career, compared with just 19% of over 55s.

The full report providing a detailed analysis of all the data can be downloaded from the LSBF website.