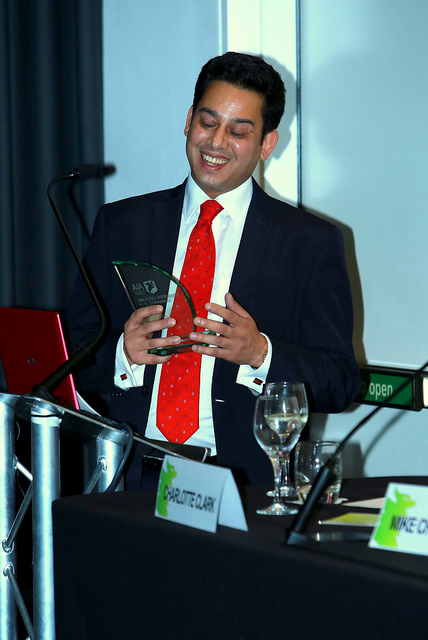 On a night when the greatest names in the accountancy industry assembled in London, the excellence of LSBF’s tuition came out on top.

Hafeez Qazi, ACCA and CIMA tutor at LSBF, was named as the Accountant of the Year at the Association of International Accountants (AIA) Founder’s Awards.

Organised annually by the AIA, the event is the institution’s flagship event. It was held at a prestigious venue in London, where a panel including the President of the AIA Les Bradley debated the pension auto-enrolment scheme and its effect on small businesses.

Having worked at LSBF for almost nine years, Mr Qazi is a vastly experienced accountant and academic, teaching a wide range of financial subjects including ACCA, CIMA, and Postgraduate Certificates in Accounting & Finance. With several professional qualifications, he has specialist knowledge of management accounting and financial accounting across several major industries, including textiles and health-care.

He said: “I’m absolutely thrilled to have won this award. I was delighted just to be shortlisted, so actually winning it is an even greater honour, especially in an organisation like the AIA where every member is extremely talented. The awards were set up to recognise the best in the accountancy profession, so I’m very proud to be recognised as a part of that.”

Mr Qazi’s achievement is the latest in a long list of awards that LSBF and its staff have received over the years. The school and its faculty have won several industry awards, including the Queen’s Awards for Enterprise 2013, the UK's highest and most prestigious business accolade. Earlier this year, LSBF won a Global Business Excellence Award 2014 for Outstanding Educational Service.

“Winning the AIA Awards is an endorsement of our dedication and hard work to deliver the best tuition and support to our students, and we are proud to add this one to our list of accolades,” added Mr Qazi.