8 April saw Equal Pay Day reopen discussion on the US gender pay gap. But how big is it really and what is being done?

This Tuesday was a symbolic day for American workers. 8 April supposedly represents the date until which a US woman would have to work to earn what the average man took home in 2013. Equal Pay Day, as it has become known in the US, has become a focal point for discussion about the gender pay gap which is still taking its toll, not just in the US but around the world.

According to one of the most commonly-used statistics from the US Census Bureau, women earn 77 cents for every $1 (60p) their male counterparts earn.

Still, as with all statistics there is plenty of debate about just how accurate the figures are. For example, FactCheck.org said in 2012 that the data uses the median pay for jobs in every industry, rather than men and women performing comparable jobs. Taken out of context, it certainly seems like a surprisingly striking gap.

Yet even if that data doesn’t reflect the problem, there is still clearly a pay gap in place. A report published by the Pew Research Centre in December found that women actually earned 84 cents for each dollar earned by male peers. One of the main differences between Pew’s study and the government data, the company said, was that it chose to measure hourly rather than weekly pay.

Pew pointed out that women were far more likely to work part-time than men, and even full-time workers can be paid for more than 40 hours per week without this being reflected in the government’s data (though the Bureau of Labour Statistics acknowledges this flaw in its research). There may be any number of reasons for this, though many women choose to work around their family commitments or even take time off work until their children are older. 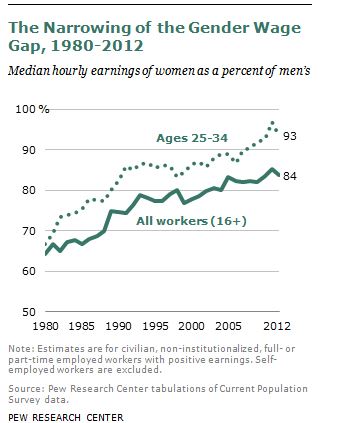 In the US, the debate has also become entwined with the controversial proposed Paycheck Fairness Act. It has failed to pass through Senate twice before but the bill, which is due to be voted on again, strengthens enforcement measures to toughen up the 1938 Fair Labour Standards Act.

For one, it will stop employers from penalising workers who talk about salaries with colleagues. Conservative voices argue that another layer of regulation would create plenty of lawsuits but offer little extra protection.

In any case, it is obvious to many in the US and elsewhere that there is a clear pay gap between men and women. TUC research found that in the UK, full-time female workers can still lose out on as much as £5,000 per year compared to their male peers. In practice, this means they are earning 15 per cent less per hour than men.

In many industries, the problem is simply that having children can make it more difficult for women to advance their careers, preventing them from reaching the high-earning ranks in their organisations. Only when that problem is addressed through measures like challenging unconscious bias and providing better access to affordable childcare, do many women see full parity being achieved.

Anne-Marie Martin currently holds the position of Director of Global Business Networks at the British Chambers of Commerce. In the…

Innovate UK is now searching for inspirational businesswomen to participate in the Women in Innovation Awards 2018.  The innovation agency,…

PwC is launching a scale-up programme that aims to boost commercial opportunities for female-led businesses. The Big Four accountancy firm…