London School of Business and Finance won three PQ Magazine Awards at this year's ceremony, which was held this week (21st February) in London. Both LSBF faculty and students beat the competition and won the awards for: 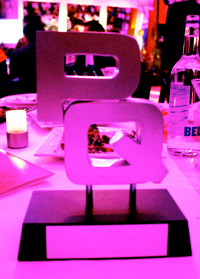 The PQ Awards recognise the best institutions, teachers, materials and students in the accountancy market

The PQ Magazine Awards is an annual event that recognises the best institutions, teachers, materials, students and learning platforms in the accountancy market. At this year's event, LSBF received some of the most prestigised prizes of the evening.

ACCA Lecturer Francis Braganza received a Lifetime Achievement Award for his work and invaluable experience teaching Financial Reporting worldwide for over 20 years, while LSBF CIMA tutor and director Peter Stewart was awarded the Accountancy Personality of the Year. In the Distance Learning Student category, our student Cathal Fahey, a Group Accounts Assistant from Ireland, was the clear winner.

This is not the first time Francis Braganza wins an award. He was awarded National Lecturer of the Year in 2004 by PQ Magazine and received nominations for Lecturer of the Year in 2005 and 2007. He has taught Financial Reporting for more than 20 years and his academic record makes him one of the best in the country. His natural ability to communicate with all students is just one reason why he has overseen more than 26,000 ACCA and CIMA students passing their exams.

"I was completely surprised when I won the award. I just felt overcome with emotion and gratitude", said Mr Braganza after receiving his PQ award.

Of all our distance learning students over the last year, Cathal Fahey has stood out. At the end of 2010, he received the 4th highest score worldwide in his ACCA P1 exam . This achievement is all the more remarkable given that a record 205,000 individuals sat papers at the same time.

"I was absolutely thrilled to have been nominated in the first place. It's really an honour to be recognised in this way and it's something I will forever cherish", said Cathal after receiving his award. 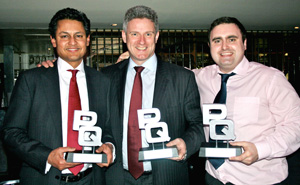 Due to his work commitments, studying ACCA through distance learning was the only viable option for Cathal and LSBF courses via InterActive were the obvious choice for him. He already holds a degree in Accounting and Finance, as well as four years' experience in accountancy roles, gained both at home and abroad. Adding an ACCA qualification to an already impressive CV, Cathal can look forward to a promising and rewarding career in accountancy.

Talking about his experience with LSBF online programme, Cathal said: "I found the online platform ideal and exactly what I was looking for. I tend to work long hours and being afforded the ability to study at times that suited was very important to me. I found the lectures clear and concise. The volume was very manageable and knowing I could go back and rewatch lectures gave me great peace of mind. I wouldn't hesitate to recommend them to anyone."

Peter Stewart is a CIMA tutor and a director at LSBF. He has over 15 years of experience as an Accountancy Courses Director and, since he joined LSBF, he's responsible for the educational success of the school's part-time accountancy courses. Being recognised as the Accountancy Personality of the Year proves that the quality of the work he does and the commitment to academic excellence is the way forward.

After the ceremony, Mr Stewart said: "I'm very pleased to have been given this award and grateful to PQ magazine and the awards judging panel for recognising the input I've made over the years to professional examination training."

The school is constantly developing new ways to support students outside the classroom to provide them with the best ACCA preparation and experience. One of the free tools created for LSBF student is the Facebook app – LSBF Prep Centre for ACCA, which integrates an application providing free video lectures, notes, podcast exam tips, discussions and past paper analysis to all Facebook fans.

The LSBF Prep Centre for ACCA Facebook page has recently reached 90,000 fans, which includes a large international community as well as LSBF students. Since 2010, LSBF has been engaging directly with its fans through this page and offering a large support network where students can share experiences and keep themselves up to date with industry news and ACCA developments